This book contains the integral Dutch translation of the fifth volume of the Samyutta-Nikaya, ‘The Connected Discourses of the Buddha’.

The Samyutta-Nikaya is traditionally seen as the third set (nikaya) in the Sutta-Pitaka, after the Digha-Nikaya and the Majjhima-Nikaya. The Sutta-Pitaka is the ‘basket’ of discourses  (sutta’s) attributed to the historical Buddha and his main disciples.

The Samyutta-Nikaya contains 2904 suttas, divided into 56 books (samyuttas), each of which deals with a particular theme. In the many, often very short, suttas of the Samyutta-Nikaya, the Buddha’s radical insights into human nature are brought out and his unique path to spiritual liberation from suffering in this world is shown.

In this fifth volume, the Maha-Vagga, ‘The Great Volume’, there are 12 books. This Volume is called “The Great Volume” because it is the largest volume of the Samyutta-Nikaya in terms of size. It is probably also called “great” because it contains the core of the Buddha’s teaching. This is because the first seven books are devoted to the ’37 factors of enlightenment’: the four ways of cultivating mindfulness, the four right efforts, the four bases of magical power, the five mental faculties, the five powers, the seven factors of enlightenment and the Noble Eightfold Path. The other five books contain suttas on the monk Anuruddha, the four stages of meditation-practice, attentive in-and-out-breathing , entering the stream and the Four Noble Truths. 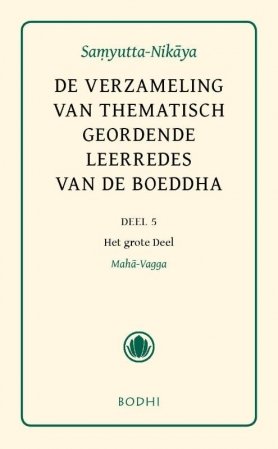