This book contains the integral Dutch translation of the fourth volume of the Samyutta-Nikaya, ‘The Connected Discourses of the Buddha’.

The Samyutta-Nikaya is traditionally seen as the third set (nikaya) in the Sutta-Pitaka, after the Digha-Nikaya and the Majjhima-Nikaya. The Sutta-Pitaka is the ‘basket’ of discourses (sutta’s) attributed to the historical Buddha and his main disciples.

The Samyutta-Nikaya contains 2904 suttas, divided into 56 books (samyuttas), each of which deals with a particular theme. In the many, often very short, suttas of the Samyutta-Nikaya, the Buddha’s radical insights into human nature are presented and his unique path to spiritual liberation from suffering in this world is shown.

In this fourth volume, the Salayatana-Vagga, ‘The Volume of the Six Sense Fields’, 10 books are included. The name is derived from the first book of this volume: ‘The Book of the Six Sense Fields’. As with the two preceding volumes, this volume is dominated by the first book, which occupies about half of it. The importance of the six sense realms is shown by the fact that in the first book the Buddha calls them ‘the all’, thereby indicating that the entire human experience can be traced back to these six realms. The complete understanding of the structure of experience leads to salvation from suffering. The second book of this volume, ‘The Book of Feelings’, forms a logical sequence. The other eight books deal with other themes. 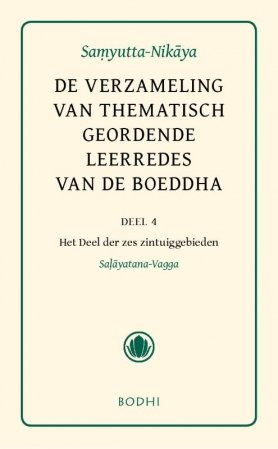