This series contains all three volumes of the integral translation of the Majjhima-Nikaya (the middle-length discourses of the Buddha) in Dutch.

The Majjhima-Nikaya (MN) is traditionally seen as the second set (nikaya) in the Sutta-Pitaka, after the Digha-NIkaya. The Sutta-Pitaka is the ‘basket’ of discourses  (sutta’s) atributed to the historical Buddha and his main disciples.

The Majjhima-Nikaya contains 152 “middle-length discourses” of the Buddha and is primarily aimed at the community of Buddhists and particularly introduces new converts to the fundamentals of the Teaching and Buddhist practice.

The first volume (Mulapannasa) contains the first fifty discourses (suttas 1-50), which are divided into five chapters (vaggas) of ten. Various topics are covered. A number of teachings is biographical and provides information about the life-course of the Buddha, some of which can befound nowhere else in the Canon. For instance the Ariyapariyesana-Sutta (MN 26): this sutta tells of the Buddha’s quest for enlightenment and of the conversion of the first five disciples after his awakening. We are also introduced to his first two teachers, Alara Kalama and Uddaka Ramaputta, whom he left, unsatisfied by their teachings.

The second volume (Majjhimapannasa) contains the middle fifty teachings (suttas 51-100), which are divided into five chapters (vaggas) of ten. In these, representatives of other ascetic groups often enter into debate with the Buddha. For example, the futility of strict asceticism as propagated by certain sects is denounced in the Kandaraka-Sutta (MN 51) and the Apannaka-Sutta (MN 60). The Angulimala-Sutta (MN 86) tells the famous story of the robber Angulimala who tried to kill the Buddha, but converted to the Teaching.

The third volume (Uparipannasa) contains the last 52 teachings (suttas 101-152), divided into four chapters (vaggas) of ten and one of twelve. More suttas of a later date are included in this volume than in the previous two volumes. 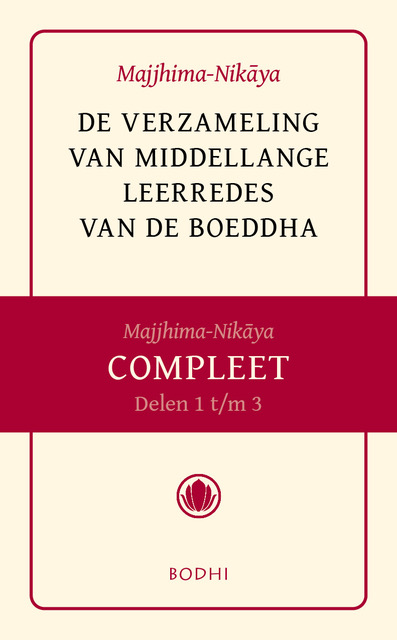