This series contains all three volumes of the Khuddaka-Nikaya (the Collection of Short Discourses of the Buddha) that have been published by Bodhi Publishers.

The Khuddaka-Nikaya is traditionally seen as – after the Digha, the Majjhima, the Samyutta and the Anguttara-Nikaya – the last of the five collections (nikayas) of the Sutta-Pitaka: the ‘basket’ (pitaka) of teachings (suttas) attributed to the historical Buddha and his main disciples.

The first volume contains the complete translation of the Sutta-Nipata (‘Collection of Suttas’) and the Dhammapada (‘Words of Dhamma’). Both are considered among the oldest parts of the Pali Canon. In the Sutta-Nipata instructions are given how to live as a follower of the Buddha. A great variety of themes are addressed, such as the meditation on loving-kindness, death, old age, desire, the impermanence of body and property. The Dhammapada can also be characterised as a manual. It is a text that indicates how we can withdraw from the chains that bind us to the suffering, to the unsatisfactory existence in this world. The Dhammapada forms a poetic highlight in the Pali Canon and is rightly considered, along with, for example, the Tao Te Ching and the Upanishads, as one of the greatest wisdom books of world literature.

The second volume contains the integral translation of the Khuddaka-Patha (‘Short Passages’), the Udana (‘Moved Statements’), the Itivuttaka (‘Thus it is said’) and the Cariyapitaka (‘Collection of Writings on Conduct’). The Khuddaka-Patha is the smallest of all the books in the Pali Canon. It probably functioned as a practical manual that a monk knew by heart or carried with him and from which he could recite. The Udana contains eighty stirring or inspired sayings of the Buddha, usually in verse form, which are preceded by a short story, indicating the circumstances in which the statement was made. The Itivuttaka is a collection of 112 short teachings of the Buddha, each consisting of a prose introduction, which gives the essence of the teaching, and an elaboration in verse. The Cariyapitaka contains thirty-five stories of past lives, as humans or as animals, of the Bodhisattva, the Buddha when he was not yet awakened.

The third volume contains the complete translation of the Theragatha and Therigatha (‘Verses of monks and nuns’). This collection is part of the oldest scriptures in the Pali Canon. In this poetic literary work 264 men and 102 women describe their lives in the Buddhist community, their experiences with the meditation-practice, their problems and the way they experienced liberation or enlightenment. The verses are amongst the most personal documents of the entire Canon and appear to have lost none of their actuality, especially in the stories of the women. 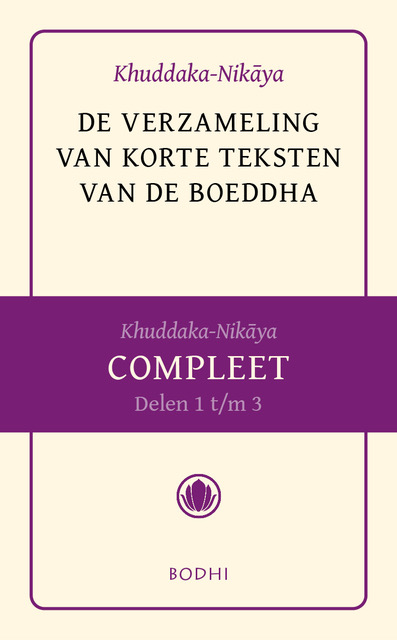